Following on from the EW01 Pop Production and EW02 Movie Production Wave Expansion boards, Technics have introduced another to the range. The latest offering, the EW03 Vintage Keyboards, that features the sounds of many electric pianos, organs and synths.

For those readers who don't know, the boards fit inside the keyboard and provide a range of new sounds, accessed from the Sound Explorer function. 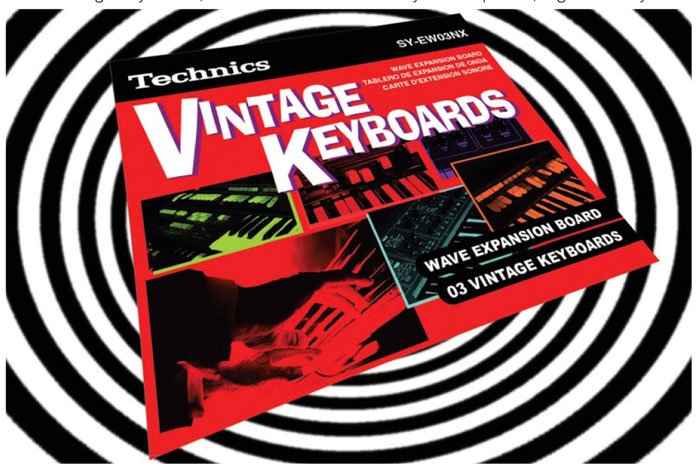 The sound names appear on the display in a different colour, making them easily identifiable. Two boards can be fitted into the KN6000/KN6500 and four in the KN7000! Divided into 10 categories, the EW03 contains no less than 246 sounds from the last forty years of the keyboard, including many that became industry standards and are still featured in the hit songs of today.

As well as these, many of the sounds from the hey-day of the electric/electronic organ are also included. The first group is Electric Piano, which includes many of the well-known sounds of the stage pianos of the 60's and 70's. Most of these were attempts by keyboard manufacturers to recreate electrically the sound of the piano using the technology available at the time.

Those of you who have played some of the early electric pianos will instantly recognise where these have been sampled from. Eighteen sounds are included in total, Clavi Sound, Suitcase 73, Raw Suitcase and Analog Piano are just four.

DSP effects are added where necessary but I also found that where it isn't selected automatically, an appropriate effect has been preset. Try adding the DSP to the Suitcase sounds, for a great slow tremolo effect.

The next group and certainly the largest is Electric Organ. Included here are 42 sounds taken from a variety of electric and electronic organs. Many Hammond sounds are included that have been sampled with a Leslie Speaker such as Fast Rotor Bright, Noisy Jazz B (the name kind of gives this one away) and Slow Rotor Organ. Technics have also provided a selection of Rotor Accompaniment sounds, so a great 2 manual organ effect can be recreated by using these sounds on the left part of the keyboard.

As well as Hammond Organ sounds a large selection of Flute tab presets have also been included, these sound very Lowrey like to me! More than a dozen are available from a simple 8' Flute to a full combination of 6,8,4,22/3,2&1. Once again some of these have been programmed for use as accompaniment sounds. As well as specific Flute tab combinations there are some other very typical home organ settings such as Smaltzy Flutes and Home Organ Jazz.

The remaining sounds in the organ group include some electronic theatre organ settings such as Lush Theatrics and Electronic Theatre as well as a few others capturing the Pop Organ sounds of the 60s. I spent a while setting some combinations into the Panel Memory and played happily for ages just using the Rotor Organ sounds. They are great and I'm sure many fans of the organ sound will buy the EW03 on the strength of these alone. Synth Lead sounds make up the next group. Sounds include such things as Moo Square, Arping On, Be There Or Be.. and 32 others. In the early days of the synthesizer these sounds were all created by taking a basic waveform and altering it with countless controllers until the desired sound, usually found by trial and error was achieved.

Other sounds include XL Pulse, Sour Funk Lead and Froggy Synth. As you can imagine, it's very hard to describe these sounds on paper so you'll have to try them for yourselves! Next we have Synth Pad sounds. The old analogue keyboards were often very good at producing big warm pad sounds, something that the early digital keyboards could not do. Things have changed a bit since the early days of digital technology but it's nice to go back and hear some of those great sounds from the analogue days. One of my favourites in this group include Dreamscape, a sound that slowly builds as you hold the keys with a Cross Delay DSP effect added and then it fades.

Others include Out Just Ray, New Dream, Be In The Sky, Silver Pad, Jam Jarre and Queasy Listening. There are some big sounds here, making great use of the DSP effects and sound editing possibilities of the Technics keyboard. For owners of a KN6000/6500 good use can be made of the Sound Controller whilst playing.

Synth Bass is next. 23 sounds are included, such as Fat Synth Bass, Bass 4 U and Ressobasstic. Not much to say about these really but they're an important part of music making with synths. From the early days of the synthesizer, many of the manufacturers tried their hardest to recreate the sound of multiple strings or a string orchestra and the next section Synth Strings is dedicated to this.

Sounds such as Symphonizer, Free Strings, Big String Sweep and Moo 6 Strings will transport you back in time to the days of string machines and the string ensemble effects found on many electronic organs. Technology may have moved on and given us the great string sounds we enjoy now but these old sounds still have something about them!

The same can also be said of the brass sounds that feature in the Synth Brass category. Filter Brass, Profit By Five, Vintage Horns and Knight In Castle are just some of the sounds included here. Synth Percussion and Synth FX are the next 2 sections. Included in the Percussion section are such sounds as Super Joopie, Planet Synth, Popcorn, Square Bell and Funky Town. All are sounds with a percussive initial attack to them. Synth FX includes such sounds as Alien Hammer, Resonance Scream, Chinese Takeaway, Drunken Cats and Be Afraid.

The last section is Dance. For many of the latest dance tracks, the sounds of the old analogue synths are used and this has prompted some of the keyboard manufacturers to produce some 'new' old style models specifically to recreate the sounds. Technics have therefore included some of these 'new' old sounds on the EW03. Trance Synth, Dance Chord, Ambient Dub, Trance Arpeg and Modernotron are just a small selection. Now you can all make a hit dance record on your Technics keyboard!

Summing up the EW03 is quite difficult and as I said before describing many of the sounds is even harder. It's like a keyboard history lesson of the last forty years. You can now make the very latest keyboard sound like one that's years old! These instruments paved the way for the technology we enjoy today and there are many players who still enjoy those sounds. That's what the EW03 is all about, recapturing the sound of Vintage Keyboards and this it does very well indeed.