As you might imagine the benefits of the SD Memory Card go far beyond replacing the storage of a Hard Drive. There's SD Sound, the new Standard MIDI File format for SD. Store and sort up to 999 songs in 99 Play Lists.

For entertainers, the music need never stop! Download SD-Audio*1 music to your SD Memory Card using your PC and the KN7000 will play it back. You can sort SD-Audio tracks into Play Lists on your PC, and even synchronise the start of the Audio (such as vocals or live instruments recorded in a studio or MP3 files downloaded from the Internet) with the KN7000's sequencer. Then you can record your KN7000 performance along with the Audio.

The SD Card is also a "bridge medium", which means that it bridges the gap between different SD products. For example, you could load images from an SD still camera into the KN7000’s wide colour screen. You can even create a slide show combined with a KN7000 sequence and Digital Audio. Connect the KN7000’s monitor output to a TV and the whole family can watch! (There’s even a built in library of 100 pictures to get you started!)

SD adds complete flexibility whether just for storing your own settings, or for downloading data from the Internet. With the KN7000 your musical future is secure!

The original Panasonic SD cards are shown below. These are now out of production. SD cards up to 1Gb work with the KN7000 but since the KN7000 was produced there are many variants of card available in the same form factor, SDHC cards and similar are not compatible.

Advanced copyright protection, compact design and fast access are giving rise to a wide range of SD products, which will expand the SD world. Be part of it! 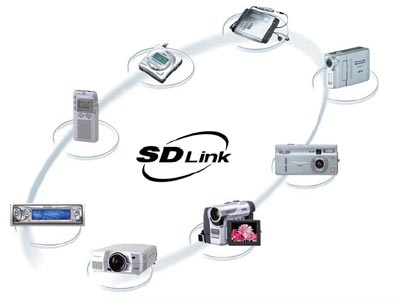 PRODUCTS IN OUR SHOP