Skip to toolbar
« Be Your Own Technics Band!
Extras
Technics Tones »
Home > Extras > Our April in Paris

Our April in Paris

Techniques with Chord Arrangements and Technochord. April in Paris is a beautiful tune that uses lots of flattened fifth, augmented and diminished chords, so it can be challenging to make it work with more simplified chords. Experienced players will work around potential problems by using different chord inversions and selecting chords on certain beats of the bar to avoid clashing notes and to select Technichord at the 'right' moment to give a slick performance. 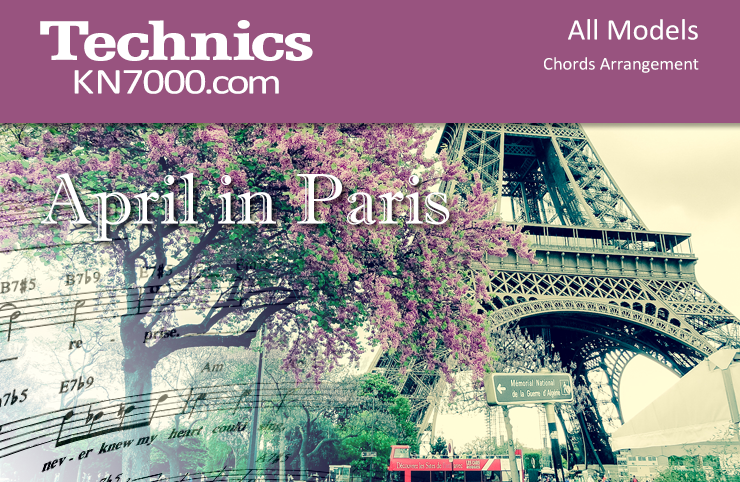 Arranging for Your Keyboard

I had some interesting discussions recently with one of our Members who was working on an arrangement of April in Paris using fingered chords on KN7000 (though this article applies to all instruments).

April in Paris is a beautiful tune that uses lots of flattened fifth, augmented and diminished chords, so it can be challenging to make it work with more simplified chords.

Also, because the chords change on many notes within bars, it can cause the sustained notes in the right hand to re-trigger unwanted notes that are in use due to the Technichord function.

Experienced players will work around potential problems by using different chord inversions and selecting chords on certain beats of the bar to avoid clashing notes and to select Technichord at the 'right' moment to give a slick performance.

I've worked up an arrangement to show you how to use some of these techniques in your playing. Hopefully by playing through this arrangement a few times you'll see how I chose chords that will work with Fingered and Single-fingered styles of playing without being too complicated, so that they suit those who haven't mastered those additional 'flavourful' chords such as minor seventh flattened fifths, or who are using Single Fingered chords.

The arrangement has simplified red and green chord symbols. The green symbols are optional. The position of the chords is important because they are placed such that if you are using Technichord in the right hand then your left hand chord changes won't be triggering unwanted Technichord notes.

For example, notice in bar eight that we don't change to the C7 chord until the right hand has stopped playing (there's a two note rest) and we add a Fill-in at the same time, to give some musical complexity to the bar.

The notes at the top of the page give some suggested Rhythms and Tempos for KN7000 but you will easily find alternatives on other keyboards. Muting some of the accompaniment parts to remove brass figures gives the arrangement a less complicated backing, which is more in line with how this piece is usually performed.

I hope you enjoy the piece and it gives you some ideas of how to use alternative chords and where to locate them to make the keyboard do what you want to achieve. Please share your thoughts in the comments... and maybe send us your recordings of the piece to feature here! 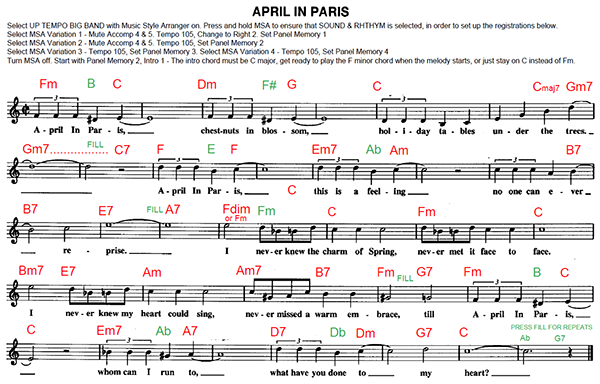 Some of the threads in our Forums have been discussing the use of Single Finger Chords and how Technichord can re-trigger right hand sounds. I've tried to address some of these in the article and arrangement above.

The links open in a new window.

Note Sounding again (re-triggering) when Technichord is on