The Music Stylist provides a total of 938 settings either in Piano or Ensemble mode. In Piano mode you can choose from Piano Solo, Piano and Combo or Piano and Ensemble styles. All of which can be selected by genre, era or alphabetical order, the display giving you all the relevant information. In Ensemble mode, the styles are arranged into groups based on the rhythm categories and once again all the relevant information is displayed on the screen.

Some great sound combinations have been included and don't forget you can always store your favourites directly into the Panel Memory. As readers of this fine publication, most of you will be familiar with the Technics' features I've written about so far in this review, but now for something completely new... 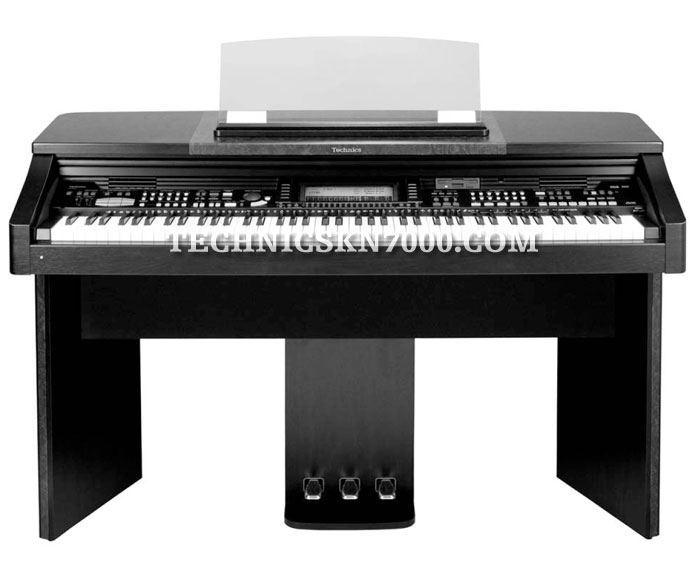 Progressive Pianist is the new musical training facility built into the PR804. Divided among four categories are 100 songs designed to teach you various aspects of piano playing. The notation/score for each song has been programmed in and it's just a case of following the music as it appears on the screen. There is a bouncing ball to keep you in time and of course the tempo of each piece can be adjusted.

The first category is Practice Makes Perfect and includes a range of scales, chromatic progressions and arpeggios. I know what you're thinking, all the boring stuff! Well not with these exercises. All of them have been specially arranged with an orchestral accompaniment and they sound really good, even the most basic five-finger exercises are brought to life. You have the option to listen to any of the pieces before you try to play them and you can also stop them at any point and practice from a specific measure. Each piece also has a 'Musical Key Point' as Technics call it, which gives you information about the song you are performing. It's good fun practicing a chromatic scale to 'Entry of the Gladiators' and certainly a lot more interesting!

The next category is Music Discovery and is designed to teach such things as harmony, counterpoint, phrasing and expression. Once again any tips that you may need about the piece are displayed for you. In this section 6 of the pieces make good use of the Technichord facility. Others teach about key changes and such things as 4-part harmony, where you can practice and play each part of the harmony separately whilst the piano plays the other three parts. These are just a few of the many topics covered here.

Next we have Grand Performer. This is essentially a music-minus-one section, with songs ranging from classical to jazz. With each song you can cancel the right and left hand parts separately for practice if you wish, before trying both hands together. There's some great arrangements of 20 well known pieces including an excerpt from Tchaikovsky's Piano Concerto, Mozart's Piano Concerto No.21 as well as a great big band arrangement of the French folk song Sur Le Pont d'Avingnon and a beautiful arrangement of Shenandoah featuring the Modern Electric Piano sound with some lovely chord substitutions. Some of theses are quite tricky, so you need your wits about you!

The last selection is called Pianist Mode Session, with songs arranged for using the Pianist Mode function. The ten songs are arranged so that when you follow the score, the arrangement you are playing is actually triggering the automatic accompaniment.

In order to practice the right and left hand parts separately or together without having to worry about the accompaniment, the chords have actually been programmed for the songs as well. Once you've mastered both hands, you can switch the chord part off, so that what you are actually playing determines the automatic accompaniment chords, i.e. wrong notes, wrong chord! As you can see, there's quite a lot to Progressive Pianist and it's a great learning tool.

A couple of other points worth mentioning are that you have the option to turn the pages of the score 'manually' which means you can actually practice the songs from the score on the screen without having the accompaniment playing. This can actually be assigned to a foot pedal if you want. Once you get to the end of a page, just press the pedal and the next page appears on the screen. Secondly, there is the option to load further Progressive Pianist songs from a disk, so hopefully it won't be too long before Technics come up with more material.

The next new feature is Theatre Sonic. The PR804 has an additional set of outputs to which you can connect a Home Theatre Receiver/Speaker system, just as with modern televisions, which then enables you to separate the various sound parts and create a huge orchestral sound as if you're playing in a large orchestra.

For example, you could have the piano sound playing from just the speakers of the piano and the accompaniment coming from the piano and the rear speakers. You can specify on the display which parts you want coming from the surround sound speakers and you can set all of the information into the panel memories. Having heard the PR804 played through a Panasonic Home Theatre System, I can honestly say it sounds great. It works well just using the effect with the Progressive Pianist songs, playing the piano part through the PR804 and having the orchestra playing in surround sound! There is an option to purchase a Panasonic Home Theatre system with the PR804 as a package, for those that want it.

The Theatre Sonic also has a Virtual Rear Speaker Mode that will create a simulated effect just using the inbuilt speakers and although it's very good, once you have heard it with the Home Theatre Speakers connected, it's not quite the same. Digital Networking, or to put it another way, making the PR804 more compatible with computers and the Internet, is one of the key features of this new instrument.

Simply by adding a USB socket, Technics have opened the instrument up to a host of new possibilities. The Audio Recorder PC software included with the piano enables you to record directly to your PC as Digital Audio. You can even overdub vocals using the PR804 microphone input or another instrument using the line-in. As well as creating WAV files, the Audio Recorder software will compress the files as MP3 or WMA (Windows Media Audio) so that you can then send your performance as an email attachment to your friends and family. You can of course burn them on to CD-R and make your very own CD's if you want to!

Using the supplied Song Manager software you can also download songs either in Technics or SMF format and Rhythm Composer data from the Internet directly to the PR804. It is also possible to load pictures taken with a digital camera directly from your PC into the piano and create a musical slide show. Up to 30 pictures can be uploaded and then by simply recording the picture changes in the sequencer control track you can create your own audio-visual presentations. Using the Video Out you can even display the images on your TV screen. For those of you who don't own a digital camera, Technics have stored a selection of pictures in the piano so you can have a go at creating an audio-visual masterpiece!

The Video Out can also be used for displaying the screen in normal playing modes as well. For example, if you are using MIDI Files with lyrics, why not output the data to your TV so people can sing along? For that final touch, Technics have even added a remote control. Now, when you're sat in the armchair listening to your recorded masterpiece or playing a MIDI File song, you can quickly move on to the next song if you don't like what you hear! The remote control can also be used to adjust the sequencer playback volume.

Naturally all the usual features you would expect on a top-of-the-range PR Piano are also included; I just don't have the space in this review to mention them all in detail. The Piano Performance Pads, Sequencer and all the functions from the previous models are there, but the purpose of this review is to highlight all of the new features.

The front of the brochure for the PR804 says 'Digital Ensemble Innovation' and Technics have has certainly added a whole new dimension to this instrument. For people that just want to sit and play the
PR804 as a stand-alone instrument, it is certainly the best Digital Ensemble so far.

For those that want to take it a stage further, it's all there for you to connect to a whole world of Digital Networking. To quote Technics brochure 'Expression. entertainment, education, connectivity, the new dimension Digital Ensembles'.