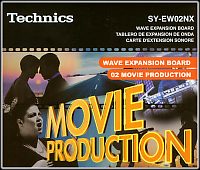 The Technics Movie Production Wave Expansion Board can be used with the Technics SX-KN6500/6000 as well as with future NX sound-compatible instruments with an expansion slot.

This expansion board broadens the scope of your KN6000/6500 dramatically by adding high quality sounds that bring movie soundtracks - from the classics to new releases - to life!

Also included are several orchestral sounds such as stereo strings, brass and woodwind. Now you can play music that sounds like a movie soundtrack!

SUSPENSE MOVIE: Includes fun sounds and special effects like those used for scary scenes in suspense movies such as ‘Spooky Violins’ and ‘Suspense Set’.

STRINGS & VOCALS: For expressive performances there are stereo string sounds, such as the atmospheric ‘Stereo Basses’, as well as string-and-female chorus combos like ‘Tremolo Cello’ and ‘Female Vocals’.