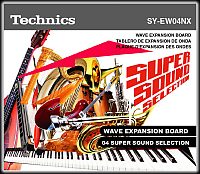 The latest release in the series of add-on wave expansion boards for the KNs 6000, 6500 and 7000 is the EW04 Super Sound Selection that adds a total of 186 vibrant new sounds to your keyboard.

This board - like the other three previous ones in the same series - provides several benefits, some of which may not be all that immediately obvious at first glance. As a cynic might say, ' Okay, this gives me nearly 200 extra sounds. But I've already got 1,000 or so, so why should I want even more?'

Coming from a cynic or not, that is in fact a very fair question, and as such deserves an equally fair answer, this answer coming in several parts:

1 - The new sounds, by far and large, are quite, quite different from those already stored in your keyboard - therefore they do not merely add to your selection of sounds but greatly expand it.

2 - The expanded sound selection allows you to explore innovative styles, genres and techniques that would not have worked nearly half as well - or even not at all - if you were limited to your standard sound selection. Some of the many intriguing ways that the new sounds can be used will be obvious when you first hear them, but read on further for some handy hints that will help you put your own imagination to work.

3 - Talking of imagination, the new sounds are bound to stimulate yours, this most likely leading you to experiment with - and, hopefully, improve! - many of your existing arrangements and registrations as well as seek out musical possibilities you hadn't considered before.

While the above may seem like pretty big claims to make for a collection of sounds, I think that most players will find that they will indeed experience most if not necessarily all of these benefits. Certainly, this was my own experience as I delved into the many novel and original permutations the new sounds made possible.

Having set the scene, let's now look at the specifics....

Because the new board literally becomes part of your instrument, it has to be installed inside its host, where it's pressed into slots designed for that very purpose - there are two such slots in the KN6000/6500 and four in the KN7000. Understandingly, some readers may be a little concerned at the very idea of opening up their beloved instrument and poking around its innards.

The truth is that installing a wave expansion board is simplicity itself: all you have to do is to loosen six screws to open up a hatch in the bottom of the instrument (having first ensured that it's power is off, of course), then plug in the expansion board in the slots that will be revealed, and replace the hatch cover. That's really all there is to it, and the operation is certainly not one that should daunt even the most cautious amongst you, as it's truly less difficult than connecting a 13-amp plug.

Apart from the installation of the expansion board, there is one more little task that only owners of a KN6000 have to perform (this is not needed for other instruments), and that is to upgrade the instrument's operating software. This, too, is simple as pie - all that's involved is to place a couple of floppy disks into the drive and follow the on-screen instructions, the whole procedure taking no longer than two minutes or so. One added bonus of doing this is that installing the latest software may cure some minor but usually rather obscure glitches that affected earlier versions.

With a KN6000/6500, you turn on the Sound Explorer button to open its screen, where you'll see one or more extra buttons marked EXP1 or EXP2. When you switch on one of these buttons, a new screen opens and from this you can choose what new sound groups you want to access, after which you select the sound in the usual manner.

With a KN7000, just turn on the EW EXPANSION button in the SOUND GROUP section and then proceed exactly the same way as for any other group. Once the board is properly installed, what are the new sounds like? Most importantly, all of them are quite excellent. Although they are the result of the usual NX technology, they do come across as having an extra quality to them that is somewhat hard to describe but perhaps can be summed up as being generally more incisive and projecting greater clarity. While all the sounds are great, the various soloist sounds do
deserve special mention - these are not just great, but truly superlative and incredibly lifelike.

I also found the selection of sounds greatly to my liking. Although I appreciate that this a very personal judgment, it looks to me that the programmers of the expansion board not only spend a great deal of time and effort on getting the sounds just right but also in providing a mix of them that genuinely adds to rather than merely more or less duplicates what you've already got in your keyboard.

Indeed, I found many of the sounds so enticing that I started looking specifically for songs where they could be incorporated to best effect. Were I to say - as I am! - that the new sounds beyond doubt added an extra dimension to my keyboard, I would not be exaggerating one tiny little bit.

Unfortunately, space restrictions prevents me from describing each sound individually, so what I've done instead is to look at the various sound groups in general, now and then singling out the occasional sound, and also providing

This selection will help turn your keyboard into an all-singing instrument - making me wonder when will it become all-dancing, as well? Seriously, these beautiful sounds are perfect not just to brighten up melody lines but also to serve as a most useful variation on the more commonly used left hand sounds.

In my view, this is the most interesting of the groups in that its sounds are in many ways a pretty radical departure from the usual and the even not-so-usual fare. As can be readily ascertained from their very descriptive names, these sounds are all vocal patterns, that is the 'performers' actually sing a short phrase, such as 'Do Doo Da Daa' or 'Mmm Do Ba Doo'.

Two important points to note about these particular sounds: First, to ensure that they're played within a suitable pitch compass, their range has been limited from G above Low C to D one octave above Middle C, or the equivalent of two octaves and a fifth. Play a key below or above that range and all you'll hear is the sound of silence! Secondly, while there are 40 such sounds, these are in fact four sets of the same ten sounds, each set pecifically programmed for a recommended tempo, this ranging from 136 to 88 beats a minute. While you can certainly choose a tempo other than the recommended one (and you can get some intriguing effects if you do so), these sounds will generally work best if played as suggested.

Incidentally, one of the really fun things you can with these sounds is to play them as pyramid chord in the melody part - as you press each successive key of the chord, the new sounds come in from their initial syllable, the chord so eventually including two or more different constituent syllables at varying pitches.

Another great way to use these sounds is to use them to replace the preset sounds in certain APC chord patterns, something you can accomplish with a few button pushes via the Sound Arranger function. Particularly suitable to be adapted in this manner are patterns from the Jazz Combo, Rock'n'Roll & Blues, and Big Band & Swing Rhythm Groups.

Just listen to some of the sounds in this group and they will immediately evoke one or more songs they will fit to a T. Can you fail to link the ukuleles to George Formby, or Aegean Picks to a certain dancing Greek? No prizes either for guessing where the Dueling Banjo can be used to good advantage!

However, despite the fact that some of these sounds appear to be very song specific, each and every one of them will be equally useful in many other tunes.

Always a mainstay of orchestral arrangements, you can never have too large a selection of string sounds, as this enables you to select the one that is exactly right for the occasion. You'll certainly be spoilt for choice when you add this lot to your instrument!

Particularly of interest in this group are the two sets of Show Organ and Electric Organ sounds. Each set has five different but totally complementary sounds - and this means that if you leave the relevant Sound Explorer page open( by pressing the DISPLAY HOLD button), you can rapidly switch back and forth between the sounds of each set to get immediate, no-fuss registration changes that mesh beautifully with each other.

Very much a matter of personal preference is the question to what extent obviously synthesiser-imitative sounds should be used when playing an instrument whose forte is to recreate as faithfully as possible orchestral and band renditions. Mind you, synthesiser sounds are also an important part of many more recent songs, so their inclusion here is more than justified, especially as many of these can fulfil a dual role by also serving as alternatives for the left part.

With this last group, we truly enter love them or hate them territory, and I'd therefore be most hesitant to suggest that you'll find all of these sounds to your personal liking. However, if you enjoy spicing up your keyboard performance with effects - for example, when playing your own version of Star Wars or the Harry Potter theme - then these will be just what the doctor ordered.

There's no doubt that the new sounds are a most welcome addition to any keyboard. In fact, I would say that they can even open completely new musical horizons for you by exciting your imagination and enthusing you into trying out innovative and original registrations or orchestrations. Additionally, used judiciously and sparingly, they're also ideal for enlivening compositions or rhythm patterns of your own making.

The SUPER SOUND SELECTION WAVE EXPANSION BOARD (EW04) originally cost £199, plus postage and packing if ordered from abroad (there's FREE DELIVERY in the UK). Included with the expansion board are detailed and illustrated installation instructions, upgrade disks for the KN6000 (these are not necessary for other instruments), as well as a floppy disk with two Standard MIDI Files that contain special arrangements that demonstrate the scope of the new sounds. What's more, Technote also included a FREE 'Super Sound Selection' registration disk that will help you quickly incorporate your new sounds into your keyboard set-up.