The ways to permanently change the sounds in Midi files using the KN7000 do not apply with the KN6500 and older keyboards.

Here is the traditional method of permanently changing sounds in a Midi file which will work for KN6500 and earlier instruments.

Staying with our 'Mack The Knife' example (but you can use any Midi file), load your Midi file in the normal way so that the SEQUENCER PLAY screen appears ready to play the song.

From floppy disk: Press DISK > LOAD > Select SMF if you have Technics songs on the disk too > Choose the song and press LOAD.

The next step is to find the track where the melody is recorded. Press MIXER in the screen, and then press Other Parts/Tracks on the panel to get to the Multi-track mixer screen rather than the Technics track mixer screen.

If you do not have a MIXER function on your instrument, another way is to play the Midi file and switch off each track's PLAY button at the bottom of the screen until the melody stops. Then you have found the track you need!

With this particular file, the melody is played by the Vibraphone on track 4.

Exit the mixer, and with the song playing, click 4 (PART 4) in the sequencer play screen so that the green PLAY icon disappears to confirm the melody stops playing. Again, this is really just a double check for those instances where several tracks may have exactly the same instrument, but only one of the tracks is the main melody track, or the track you wish to alter.

Switch Track 4 back on again. 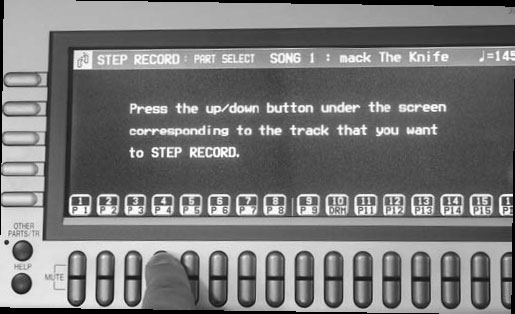 Using the left/right CURSOR control, move the cursor forwards, i.e. to the right, and various events will be highlighted and described in the screen one after each other as the cursor hits an asterisk. These events are the setup conditions for that track of the Midi file, and can consist of Volume, Pan, Expression, Reverb, Chorus etc.

The exact order will vary from Midi file to Midi file, and many simultaneous control events might appear on a single asterisk. 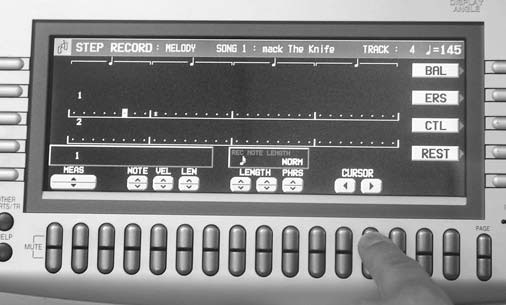 When you have hit the sound - highlighted by the voice used coming up in the display box in the screen - you have the correct control asterisk.

With the voice highlighted in the Sound field in the screen, press erase (ERS) in the screen to remove that voice

Go straight to the Sound Explorer and choose a new voice to replace it with. The instrument will 'beep' to signify a voice has been memorised. If you memorise the wrong voice, just erase it again and choose another.

Note: If you want to keep general Midi compatibility choose a GM voice from the GM group in Sound Explorer.

Exit from this screen after you have memorised your new voice.

If you want to change any other tracks, select them now and repeat the procedure. When finished, exit out of the Step Record screen and then turn Program Menus off.

Press Sequencer Reset and then play the Midi file to confirm that the change is permanent.

If you don't like the new voice, repeat the steps with another voice, or load the original song again and start from scratch. This is why it is not recommended to overwrite your original song!

It only remains to save the Midi file, and here you should save to a blank space or better, another disk, so that your original, professionally played, song is not overwritten.

Press DISK > SAVE > SMF FORMAT 0 > Select an empty location and change the name if you wish.

Now press PANEL HEADER to ON > Change SAVE AS to GM2 > Press SAVE.

With a floppy disk you can now go the SMF Direct Play screen and switch between the 2 songs if they are on the same floppy in order to confirm that the change is permanent.