Looking at ideas about orchestration combined with Technichord, using concepts that are based on real musical situations. Phil's article is appropriatefor all Technics keyboards.

Registration is a key point in using a single keyboard.

Actually it has always been the key point in playing a keyboard instrument. For example, years ago when as a callow youth I worked in a music shop we were mostly selling organs. For students attending lessons we would offer a sort of free extended lesson which was based solely on ideas about expression and registration. The object was to show that simple changes in registration that have a logical structure would lift a performance from the ordinary to something special.

This remains the case with playing a KN keyboard or PR Piano, but how do you learn which registrations to choose? In my experience, the answer to that question is "listen". In truth there is nothing new under the sun. Great musical heroes have done it all before (trust me). So for us the fun is in discovering our musical heroes and taking apart what they've done. Listen, absorb, make notes, analyse. Then rip off all their great ideas.

Well, OK, that's a crude way of putting it, but it is the sincerest form of flattery isn't it? The adjective "eclectic" most aptly describes how I think we should be. Gather influences from a lot of sources and come out with a result that is uniquely "you". But most importantly, have fun doing it. (I repeat that if any of this stuff gets in the way of having fun, avoid it like the plague!)

One of the most puzzling sections of the orchestra for many (me included!) is the strings.

This is truly the section which separates the men and women from the boys and girls (how PC can I be?!) But as I've often written there is a lot of material available to read which gives great direction in how we as keyboard players can do justice to real instruments. As a preface to my further ramblings I should that the study of String writing is a life time pursuit. No one article could do it justice and were it to come close it would have been written by somebody eminent in the field. As you're stuck with me I'll aim my thoughts at how you produce some good string sounds on your Technics keyboard and restrain myself from any claims that this would set you up for writing the score to the next Spielberg block buster. OK?

For the record I want to mention a few of my heroes in String writing (perhaps you might listen to them if you get the chance). The king of them all for me is Robert Farnon. Most people will know him for his compositions such as the wonderful theme to the TV series "Colditz", or for such melodies as "Westminster Waltz".

Mr Farnon was described by none other than Andre Previn as the greatest living writer for strings. Another who must be the most successful and prolific movie composer ever is John Barry, whose use of strings is both unique and exquisite.

Of others whose use of strings is particularly striking (for me) Johnny Mandel and Jeremy Lubbock are two of my heroes and as a great fan of film music the Daddy of them all, Erich Korngold is at the top of my list. Well, as I'm not on a commission from any of them or the latter's estate I'll continue.

As far as this writer understands the most challenging section of the orchestra to write for is the string section. It is perhaps then not surprising that as somebody involved with developing electronic keyboards for the last 17 years the most difficult sound to emulate successfully is also strings. 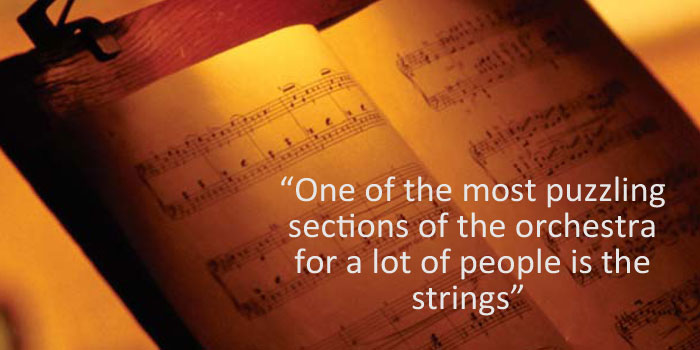 This is true both as a musician programming music and as a sound programmer.

By way of a change and before suggesting some ideas for playing string sounds I'd like to explain why this is. Consider the piano as an instrument. It has 88 keys and you can play big fistfuls of them together and produce huge chords. Consider a Trumpet and you have an instrument which can produce one note at a time. It is easy then to accept that to produce a chord with a Trumpet sound you need at least three Trumpets (because three notes make a chord, two notes make a harmonic insterval). You write three separate lines of music which together form harmonies and when your three Trumpeters play together, hey presto, Trumpet chords.

One instrument per voice?

In a Big Band of course you might have four Trumpets fulfilling this role, plus maybe four Trombones and five Saxes. In all cases where there is a chord sounding there is pretty much one instrument per voice. (Of course there are exceptions such as unison lines, but bear with me). For Strings the situation is different.

Of course a solo string instrument such as a Violin or a Cello is beautiful when played well. But in an orchestral situation single string instruments would be completely lost. This is why when you see a Symphony Orchestra (or a "pops" orchestra) the strings are disproportionate in number as one section of the orchestra to the Brass, Woodwind and Percussion.

If you had a seven note chord being played by the String, each note in a real orchestra would be played by several instruments. These would be divided into four sections (certainly in a light music orchestra), 1st Violins, 2nd Violins, Violas and Cellos. (Double bass in a light orchestra is usually part of the rhythm section).

When you start to voice chords with lots of strings the way they combine gets very complicated. Another critical point is that strings can sound hugely different depending on how they are played. All of this is essential knowledge for the "real world" arranger, and worthy of consideration for us "virtual world" arrangers.

For example, (these being the tip of the iceberg) the direction of bowing, which string is used, whether the line is played on one string or more, whether the string is open or muted or what type of vibrato is used. Double, triple or even quadruple stopping can be achieved where one instrument produces two, three or (though more problematical) four notes simultaneously.

Harmonics can be produced and on top of this different types of note such as bowed (arco) plucked (pizzicato) or a kind of cross between the two called Spiccato. The extremes possible are exemplified for me by the instruction "Col Legno" (or "with the wood") in which the string is played in a staccato fashion with the back of the bow.

Picture now the single keyboard with a few different String sounds. Perhaps "Symphonic Strings", "Slow Strings" and "Pizzicato Strings" and it is little wonder that this is the toughest section of the orchestra to emulate. Those of you with KN keyboards or PR pianos will have at your disposal a much wider range of sounds.

But just for clarity let's consider for a moment the complexities of producing that sound. As with any instrument preset on your Technics keyboard the original sound is a digital recording of the real instrument. This is the same with String sounds as with Trumpet, Clarinet, Piano and so on. So to create the sound of several violins playing together you need to record several violins playing together.

Looping, or, after 2 seconds it stops!

Simple eh? Well, not really. Imagine that you have a recording of four Violinists playing a note in unison. The note you recorded lasted for 2 seconds. Now you can play the note on your sampler and after two seconds it stops. Not much good for playing Charmaine at 90 bpm! So the note must be looped so that it becomes endless. This means literally finding a start point after the attack of the note and an end point thereafter, which match well enough so that when you loop the note round and round it is not too obviously looped. (You will usually hear some sort of "glitch" at the loop point, but this depends on how sensitively the job has been done).

This explanation relates to my previous touching on the range and versatility of String instruments. If you have a great arco string sound you cannot use it for Tremolo strings. Sure you can add some effects to the sound, but will it sounds like real Tremolo Strings? No. So the wide variety of String samples you have at your disposal the better you'll be able to create the sounds. 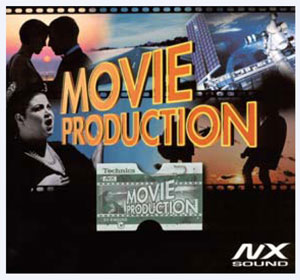 Thankfully, Technics instruments are pretty well equipped. (If you are really keen on String sounds the EW02 "Movie Production" expansion board is a great addition to your KN6000 or KN6500).

At the very least all of these complexities mean that to get a good String ensemble effect you need to consider registration quite carefully. Lots of factors come into play and the facilities on your Technics instrument really do allow you to cater for them.

Let's continue last issue's theme of Technichord and consider how to create a chorded String sound with which you'd play the melody. I'm think of the sort of lush string sound that you might associate with a Swing Orchestra. In a real string orchestra the way the notes of a chord are divided between different sections is very important.

As a simplification the Strings are divided into 1st Violins, 2nd Violins, Violas and Cellos (OK, Celli for you purists). It's easy to imagine a four note chord, or even a four part piece of music, such as a Hymn. But each section can be divided further to provide more notes. How effective this is in a real orchestra depends on how many players you have (and maybe your budget!) But in our virtual orchestra of course we can reach Wagnerian heights with an unlimited virtual budget! However, some restraint might be the dividing line between good and bad taste, so the guide line that "less is more" is good to keep in mind.