Our Technics KN7000 Blog keeps you in touch with developments on our website and KN7000 news & views. 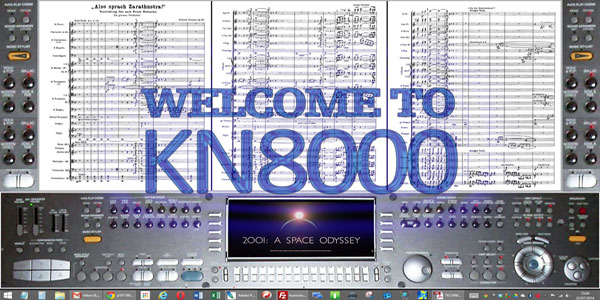 I'm in discussion with some programmers and hardware manufacturers about a massive new project relating to the KN7000 at the moment. I'm calling it KN8000 for fun but there's also more than an air of seriousness behind that title.

I know there's been a lot of talk over the years about Technics resurrecting the KN7000, manufacturing a KN8000 or resuming production of keyboards and musical instruments but that's not going to happen. Keyboards such as the Yamaha Tyros 5 and other new arranger keyboards are more and more reliant on, or connected to, computers, the Internet and software.

The future lies in that direction doesn't it? But the ease of use and the 'flavour' or character of the older hardware keyboards (and we're all Technics fans here, so let's say Technics Keyboards) seems to be lost somewhere in the mix.

So, without giving too much away, let's say our project has three components or possibilities:

I'm going to help you visualise some of these in the near future by publishing some photos of my own setup, which is a KN7000 supported by a 23" touchscreen computer (which is about the size of two pages of music).

My touchscreen replaces the need for paper music and sits above my KN7000 where you would expect the music rest to be. It also runs my virtual instruments, allowing me to play thousands of the best quality sounds available directly from the KN7000, through its sound system.

Let your imagination run wild for a moment, and forget abut economic viability because as we all know, anything is possible...