I'm sure by now you've seen and heard a lot about the new KN7000 keyboard. But what about the new PR pianos? They certainly deserve more than just a passing mention. So, if pianos are more your thing, read on and find out just what Greg Philips thinks to them...It certainly looks different, was my immediate reaction when I first saw the new PR804 at the Frankfurt Musikmesse way back in March of 2002.

Although Technics have certainly made changes to the sound and features of the PR models with each new range, the cabinet design has remained largely unchanged for the last few years. A few subtle changes here and there, but nothing major, well up until now that is.

As always with Technics' pianos the cabinet is available in two different finishes - the cherry wood colour as featured in the advert and a black finish which has maple effect inlay in the top surface of the cabinet (and very nice it looks too).

The music stand is completely removable and is made from perspex rather than the usual wood. This certainly adds to the overall contemporary look to the instrument. The styling may be different, but a quick glance over the panel and anyone familiar with previous PR instruments would immediately feel at home. All the usual features are there of course, along with several new ones, but more about those later. 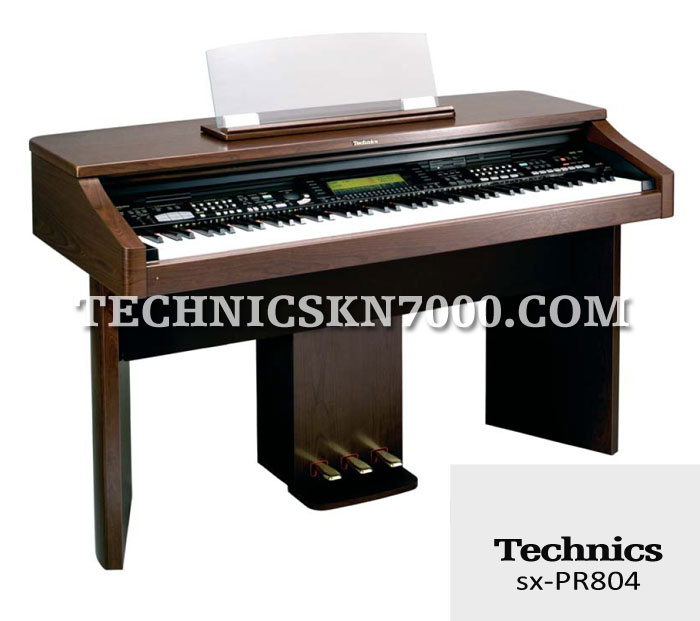 For the first time on a PR piano, Technics have included the colour screen from the KN6500 keyboard, which certainly helps with the operation of the instrument. As usual the sounds are grouped to the right of the screen and the rhythms to the left. In keeping with all previous models, the piano sounds have four dedicated buttons, which are separate to the other sound buttons for quick recognition. Needless to say, the Grand Piano sound is superb, right across the keyboard range, as indeed are all the other Piano variations – Baby Grand, Mellow Grand & Pop Grand. The Mellow Piano gives a good representation of a Grand Piano with the lid lowered. The Pop Grand is the complete opposite, a really bright sound that you would hear on many pop records of today.

With over 1100 sounds, which includes 2 sets of drawbars and 39 drum kits, it's impossible to mention more than just a few, but the quality is certainly up to the usual Technics standard. A nice feature is that all of the Soloist Instruments (the sounds, which feature natural vibrato, recorded from the player) are grouped together.

The previous PR series featured a few Soloist sounds but the PR804 has 25 including great Jazz Trumpet and Trombone Soloist complete with shake when you hit the key harder, along with the beautiful Oboe and Cello sounds. Other sounds to listen out for are the Live Nylon and Folk Guitars, as well as some new String and Vocal presets. There's also a great Fast Rotor Organ Sound, which has been sampled from a Hammond organ complete with Leslie speaker.

As with previous models, it is possible to mix two sounds together and you can also split the keyboard and play a different sound with the left hand and with the polyphony doubled to 128 notes, you're not likely to run out of notes, even with all the accompaniments playing as well. Overall, the sounds are first class and some great combinations are available. I should add that full Sound Edit (exactly the same as the KN6500) is available for those that want to modify any of the preset sounds, or indeed create new ones. As usual all your Sound Edits can be stored in any of the 40 memory locations.

Moving on to the Rhythms, there are now 160 as opposed to 128 on previous models including many of the Movie and Show patterns from the KN6500, such as Modern Opera, think Andrew Lloyd Webber and Secret Agent, a touch of the James Bonds! There are also some new styles including a fantastic Miller Band pattern, as well as Swing Romance and Swing Ballad. All are great patterns with some super settings when coupled to the Music Style Arranger.

Many new 1960's and 70's patterns are also included such as 70's Radio (very Carpenters) and 70's Orchestra, which fits perfectly to Barry White's 'Love's Theme'. There's also Cavern Pop, pretty self-explanatory I would have thought and Surfin' pop, again the title says it all! There are also a few organ style patterns included such as Organ Samba, Organ Bossa and Organ Showtime, all of which should please fans of the organ sound. Whilst on the subject of the Rhythm Styles, I should mention that it is now possible to manually adjust the Reverb level on all 8 parts of the accompaniment without having to reprogram the pattern.